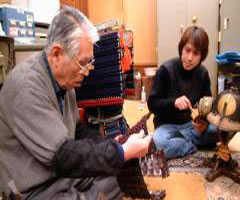 “Yoroi protects the life of samurai warriors. As important as their lives, only the finest Yoroi would do. This level of perfection is reflected in the craftsmanship of the armor.” Masahiro Morisaki and his son Tateki said proudly.

Masahiro Morisaki was appointed to the level of renowned master craftmen by Nihon Katchu Bugu Kenkyu Hozonkai (the Research and Preservation of Japanese Helmets and Armor)- Tokyo, and he is the only armorer in West Japan to have earned this lofty distinction. Masterpieces of high quality original period samurai armor and helmets are displayed at their store in Okayama.

Masahiro was raised in the house of an antique trader specializing in Japanese armor. After world war two, at the age of thirty, he became determined to live his life as an armorer. Restoring and making japanese armor requires many varied and skilled techniques such as leather and silk dyeing, metal-carving, iron smithing, braiding, and lacquering, which took him more than ten years to master.

Eight years ago, Tateki, who was working in Tokyo, decided to succeed his father as an armorer and began to apprentice under him. Together with his father they restored Konito Odoshi Oyoroi in Oyamazumi shrine in Ehime prefecture, which is a national treasure, and one of the three most valuable suits of Yoroi in Japan. . Tateki says “They represent a high level of art, craftsmanship and - express the spirit of the age.”

Currently they have been working on Akagawa Odoshi Oyoroi in Okayama prefectural museum, which has also been designated a national treasure. Over a thousand years old, the original lacquering has worn off and the leather has been completely deformed. They are putting all their efforts into this great work of art and hope to complete it by the beginning of this spring. “There is a special relevance to it. Perhaps it will be my last work, and I hope that it will be the work I am most remembered for.” Masahiro has made the restoration of Yoroi his life’s work, a work that he has now passed down to his son, Tateki.